The birth of COMES 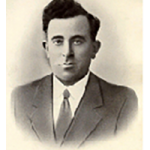 COMES was founded as a one-man business Enterprise by Colombo Giovanni in 1936 in San Giorgo su Legnano, a small town north-west of Milan, a small town north-west of Milan, the small firm, which since the first years of the ’40s has developed mechanical applications for the textile field, was commissioned the design and construction of a rudimental polishing machine for precision optical surfaces (ocular, lenses, prisms). The use of this first prototype was so successful that, in the following years, the production of the firm was entirely based on the construction of machinery for precision optics.
During the Second World War a serious illness struck the founder so heavily as to make him completely inactive and to force his sons, at that time only boys, to take over the family business. The three brothers, Giuseppe, Anacleto and Enrico, pursued and reached a development of the business which in 1956 led to the transformation of the company into COMES S.n.c. (in 1980 transformed into S.r.l.) and its transfer to via Veneto 6 in Legnano. 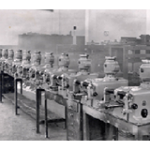 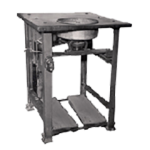 From the first manual machines, where the generating and refining operations were carried out with the aid of emery and where iron oxide was the polishing component to be used with the old “tarred” felts, in 1950 COMES developed and constructed the first spherical generator with diamond-edged grinder. In the same years, in Italy and the world, the field of the correction spectacles entered the mass-market. In this period the company started the real technological development and the world exports. 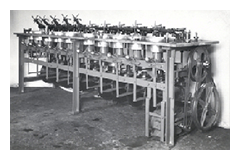 Some years later the advent of cerium oxide and the diamond-edged pellets encouraged the creation of faster, more industrialized machines; among these we recall the huge success of the first historical models of HS/2. At the same time the machines with wheel for the production of CX toric surfaces had their greatest moment. 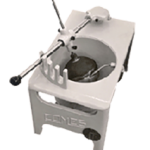 In the early ’70s COMES develop the studies and the realization of the first completely automatic machines for the generation and refining operations, called GENMATIC. In 1975/76 was born what perhaps is destined to remain in time the “symbol” machine of the company, the POLMATIC, an automatic refiner / polisher spherical machine: famous for introducing a unique processing system capable of achieving results that are still “unapproachable”. The surfaces polished with COMES machines are nowadays identified in the sector as “velvet lenses”, to define the very high degree of fining quality.

The advent of the robotized lines

In 1980 the robotised lines for the production of spherical lenses, plants whose production cycle is completely automatic from the loading to the release of the finished lens, “took shape”. In the same period the development of the market led to the creation of machines for the processing of CC toric surfaces. 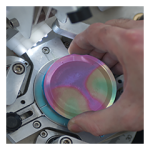 At the beginning of the ’90s, COMES patented the lens blockage system by means of vacuum, which in the prescription but mainly in the mass-production field, made it possible to totally eliminate the old alloy system.

The success of the COMES machinery, in particular the robotized lines, was consolidated reaching the highest level also in the field of suns lenses and of the molds for the production of organic lenses. 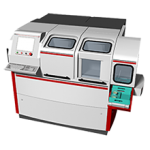 With the entrance of the 21st century, the range of machinery for the mass-production of lenses is flanked by the new line of machinery for RX prescription laboratories. The new machines immediately offer a technological development that leads to a large reduction of the working times and to a geometrical precision, thanks also to the CUT TO POLISH generation.

Comes is one of the forerunners in “single point technology” for the production of FreeForm surfaces. Recently the Generators family called HDG & IMPACT and the ACTIVA family of polishers, represent  the COMES state of the art in terms of designs, precision, speed and cosmetic quality in the production of Digital and Multifocal FreeForm lenses.

The advent of LDS Software Café 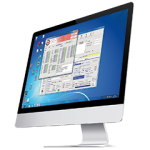 In 2010 COMES integrates in its FreeForm range the CAFE Software, a LDS with unique features that allows users a powerful tool (a real optical CAD / CAM) of study, analysis and creation of infinite number of Designs, for the realization of Progressive, Degressive and Anti-Fatigue lenses, completely customized on user opt. refraction and morphologic characteristics. 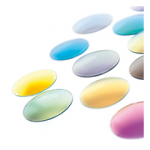 In addition to traditional applications for the optics/ophthalmic lens sectors, COMES now offers several solutions for the machining of special surfaces for the sectors of: